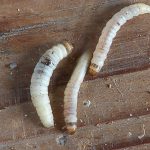 A Detailed Guide About How To Get Rid Of Small White Worms In House?

A white worm is usually a larval insect, most commonly a moth or flies larva. As rotting organic material (such as a kitchen trash bin) attracts fly larvae, and dark, confined spaces tend to attract moth larvae, these larvae can appear almost anywhere.

Parasitic worms can also look white or cream-colored, such as pinworms. There’s a decent chance you’re dealing with common larvae if you see white worms crawling up the walls in the house. Pinworms appear only after they infest the digestive tract of their hosts.

Small white worms in house don’t appear from anywhere, and they appear due to a reason. The insects are attracted to spoilt food or decaying materials in your house and use it as a breeding site to lay their eggs, which develop into small white worms. A thorough small white worm inspection can assist you in determining where small white worms have been settling and where you should concentrate on your approach.

Small white worms in house can be located in decaying organic matter, food items or decaying matter, and filth. Within kitchens, they could be found in the pantries of the food items that have been spoiled and pet food, or on fruit that is rotting or in production which has been put out. Small white worms are also discovered in garbage containers that aren’t sealed. Or, the garbage hasn’t gone out for a long time.

How to get rid of small white worms in house?

If you’ve found small white worms in house, the chances are that you’ve found the cause of the reason they’re there. Food particles and dirt are the most common reasons why you’d encounter small white worm infestations within your home, so it is essential to identify the source of the filth, get rid of it, and conduct a thorough cleaning.

The most important area to concentrate on is typically the kitchen, as this is the most common place where food will get rotten and garbage can pile up. This is the place where small white worms in house and flies in house will congregate. Clean your counters, tabletops, and floors, sweep your floors, eliminate moisture sources, throw away any leftover food items, and empty the garbage. This is the most crucial of all steps because any pesticide product can do the job in the kitchen if it isn’t clean.

If you’ve noticed small white worms in your basement or garage, clean and sweep the area thoroughly and then remove all decaying debris and dispose of it immediately into a tightly sealed trash container with a secure lid outside of your home. If the issue is mostly outside, take care to clean the areas where you’ve seen bugs, like around food items that have been spoilt droppings, food items, pet feces, and kinds of filth.

After your home has been cleaned and cleaned, you must clean the tiny white worms using the combination using a synthetic called Flex 10-10 and Martin’s IG Regulator. The Flex 10-10 product is a high chemical insecticide designed to control flies and other pests. Martin’s IG Regulator is an insect growth regulator that disrupts how flies reproduce and small white worms, preventing the growth of larvae, eggs, and adults. This combo kills small white worms in a matter of minutes and turns it impossible for flies to reproduce.

For a pump sprayer, fill the sprayer half with water, then add the correct volume of Flex 10-10, based on the area of the treatment area. Fill the rest of the 1/2 gallon of water. Close the lid of the sprayer and shake it to mix the solution. Once the mixture is well-mixed, you can add Martin’s IG Regulator’s sound volume and agitate it for a second time. Then, pump your sprayer several times to create a low-pressure spray, and you’re now ready to apply.

To get rid of tiny white worms or insects that live in tight spaces or structural voids, we suggest using Pyramid Aerosol. Pyramid is an insecticide made of pyrethrum, specifically designed to kill flies. It includes straw applicator tips for treating crevices and cracks. Pyramid doesn’t have an active ingredient and is used instead to spray pests directly with a fast and deadly knockdown.

For use with Pyramid Aerosol, use the straw applicator to the Pyramid sprayer, and then apply it to areas of tightness and crevices. You can also apply Pyramid Aerosol without the nozzle to apply an air spray, such as on top of trash containers.

After you’ve treated and eliminated Small white worms in your home, they could return if you did not take preventative measures to prevent them from coming back. As we have mentioned earlier, small white worms are only present in the absence of proper hygiene standards in place environment, whether it’s at your kitchen at home, in a garage, an outdoor space, or the restaurant. Do the following regularly to avoid future experiences with Small white worms.

Clean your tabletops as well as counters in your kitchen.

Make sure to seal all food items inside an airtight container.

Secure your trash bags and containers in a way that will ensure that there is no breeding or contamination.

Cover all crevices and cracks using caulk to prevent the entry points for fly species.

Make follow-up applications for Flex 10-10 monthly and Martin’s IG Regulator every six months to keep Small white worms and Flies from your home all year long.

Apart from this, if you are interested to know about How To Remove Window Screen then visit our Home Improvement category.

What are Small white worms?

How To Get Rid of Small white worms From Your Yard?

All The Information You Need To Know About How To Remove Press On Nails?

A Step-by-Step Guide About How To Remove Window Screen Easily?