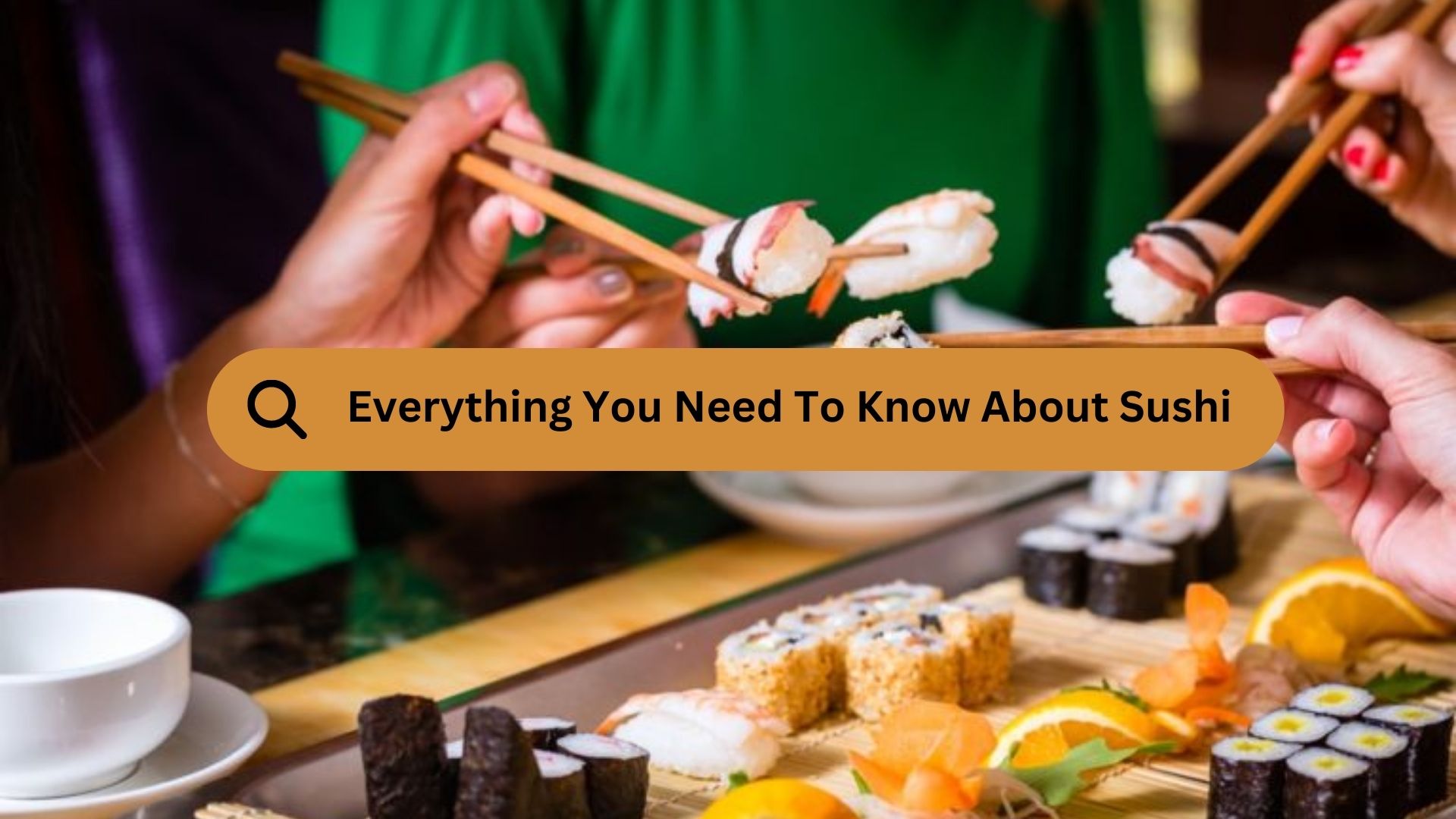 Everything You Need To Know About Sushi

Sushi is a healthy and delicious food, but it’s not for everyone. Sushi: Everything You Need to Know About Sushi does cover all things about sushi, with the claims that you’ll become a sushi master. But, there are actually a lot of interesting facts about sushi than you know.

Sushi dates back to at least the 6th century A.D. when fermented rice was first introduced to Japan from China. Originally known as nare-zushi (“sour-tasting”), this early form of sushi was not served with raw fish, but rather pickled vegetables and saltwater fish like tuna or salmon. It wasn’t until the Edo period (1603-1868) that fresh fish started being served with rice along with vinegar and sugar.

Sushi is a Japanese delicacy that has been enjoyed for centuries. It’s made up of rice, seaweed, and raw fish or seafood. The most common types of sushi include nigiri (raw fish on top of rice), maki (sliced raw fish or seafood wrapped in seaweed and rice), and temaki (hand rolls).

Sushi is typically eaten with soy sauce and wasabi paste. It’s also common to use chopsticks to eat it, although you can use your hands if you want.

How Many Types of Sushi Are There?

Sushi is a diverse cuisine, with many different types of fish and vegetables being used as the main ingredients. There are also regional differences in terms of what kind of rolls are popular in each area, so it’s important to know where you’re eating before you go.

Nigiri sushi is made by placing a piece of raw fish on top of a ball of rice. It’s usually served on top of an oval-shaped bamboo mat called a “o-han.” This type of sushi originated in Japan and is one of the most common types found at restaurants today. Some people like to dip their nigiri sushi in soy sauce before eating it, but this isn’t necessary — the chef will season each piece before serving it to you if needed.

Rolled sushi is perhaps the most famous form of Japanese food outside Japan itself due to its popularity overseas (especially among tourists). Rolled sushi consists of various ingredients rolled up into cylindrical shapes using nori seaweed sheets as wrappers or “skins.” These wrappers are usually filled with ingredients like rice and fish, but they can also be filled with other foods like seaweed or cucumber. The most common types of rolled sushi include:

Chirashi-zushi (also known as “scattered sushi”) is a type of sushi that consists of thin slices of raw fish, served over rice. The dish is often garnished with sesame seeds and seaweed. Chirashi-sushi can be served either warm or cold, depending on what kind of fish you use in your recipe.

Sashimi is another popular type of sushi that consists of thinly sliced raw seafood or meat, served with soy sauce and wasabi paste as an accompaniment. Sashimi is usually eaten with chopsticks, but some people prefer to eat their sashimi with their hands (using one hand for dipping and one hand for eating).

Maki-sushi (or “roll” sushi) refers to any type of sushi that’s rolled up into a cone shape using nori seaweed sheets (for example California rolls). There are many different kinds of maki-sushi.

How to Make Sushi?

Sushi is a Japanese dish made of vinegared rice and other ingredients, which may include fish (often raw), vegetables, tempura, or egg. Styles of sushi and its presentation vary widely, but the key ingredient in all cases is the rice.

Sushi has evolved into an art form through centuries of development and innovation. The origin of sushi dates back at least to the 8th century BCE, when fermented fish was stored in rice for transportation. Sometime around the 12th century CE, sushi became an established dish in Japan.

Sushi can be enjoyed at home or in a restaurant, but if you’re going out for sushi, make sure you know what to order!

First off, you need to make your own sushi rice:

Start with a large pot or saucepan; add water and salt (1/2 tsp salt per cup of water). Bring to a boil over high heat. Add rice (1/2 cup rice per person) and stir to prevent sticking or burning. Cover and bring back up to boil again; reduce heat slightly and simmer for 15 minutes or until all water has evaporated and there is no more steam coming out of the pot. Turn off heat and let it sit, covered, for 5 minutes. Use a wooden spoon to fluff up the rice; this will help separate the grains and keep it from sticking together when you roll sushi. Now you’re ready to make sushi! Start with some cooked meat or vegetables (your choice), and place them on top of a nori sheet. You can also add cooked shrimp, crab sticks or imitation crab meat.

How to Eat Sushi?

Sushi comes in many forms and each type must be eaten differently. Here are some tips for eating sushi:

Place your chopsticks together and place them on the right side of your bowl or plate. This will show that you have finished eating.

Use your fingers to pick up the sushi from its top edge while leaving some space between it and your fingers so that it doesn’t fall apart easily. If using your hands to eat nigiri (hand-rolled sushi), hold the fish side of the nigiri with one hand while lifting the rice with the other hand using chopsticks or fingers (traditionally only fingers were used). Do not dip nor spread wasabi on nigiri because it is already flavored with wasabi paste inside!

Tear off small pieces (about 1/2 inch) from the end of the maki or nigiri with chopsticks before dipping them into soy sauce. Place the piece of sushi on your tongue, close your mouth and enjoy! Do not dip nor spread wasabi on nigiri because it is already flavored with wasabi paste inside!

What is All You Can Eat Sushi?

All you can eat sushi offers a wide variety of sushi dishes, including nigiri, sashimi, and rolls. The quality of the sushi is usually not as good as what you would find at a high-end restaurant, but it is often better than what you would get at a standard restaurant. You can also expect to pay less for all you can eat sushi than for sit-down meals at restaurants or bars. If you want to try different types of sushi without having to worry about paying more than you intended to spend, it helps to know how much each type costs.

How Does All You Can Eat Sushi Work?

All you can eat sushi works in the same manner as any other restaurant. However, there are some important things that you will need to know before going ahead with your visit to this place:

1) Make sure that there is an area where you can sit down comfortably without feeling cramped or crowded. This will ensure that all customers have enough space for themselves and their families or friends.

3) Make sure that the tables are clean and ready to be used on the day of your visit. If they aren’t, then you should be able to ask an employee if they can get one ready for you so that it doesn’t delay your order.

Benefits of test series for upsc 

Places Where You Find Best Deals on Pizza...

Amazing Advantages Of In A Single Day Oat...

Cake will make your party special.

What Vegan Foods Should You Eat For Healthy...