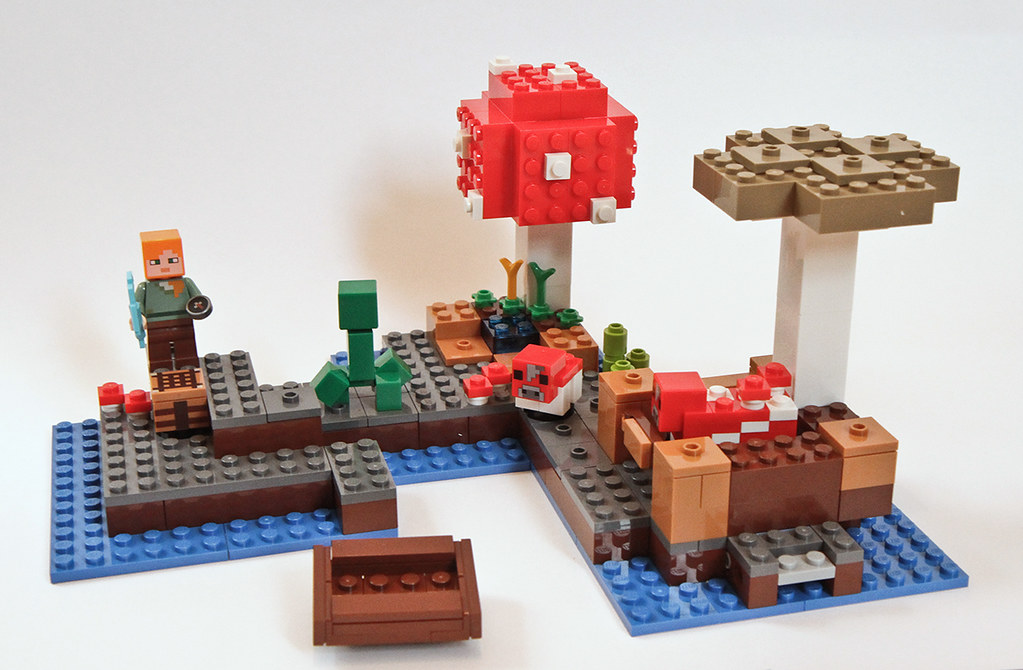 You’ll regularly come upon a highly unusual and exceptional biome when traveling the planet or sailing the seas. Rather than grass, the ground is made of mycelium. Craggy rocks surround the ocean. Except for strange red cows, no mobs spawn. And there are giant mushrooms all over the place. Giant mushrooms are formed of mushroom blocks, which may be found on mushroom islands, including in swamp & roofed forest biomes. They’re helpful as a source of fuel, building material, and sometimes even food.

You can also use them to construct. Mushroom blocks are easy to break (which is helpful if you have a Creeper in your home and need a back door), and they don’t burn. They’re a helpful construction block because they’re easy to harvest in significant quantities by adding bonemeal to a mushroom established on the ground.

You can turn an existing giant mushroom into a house by adding additional walls and a door if you wish to. They’re the ideal size for a temporary base away from your home headquarters, where you only need the bare necessities. If someone else discovers it, they’ll believe that the guy who resides there is a true fungus. A mushroom block is a solid object that makes up a massive mushroom, which is made up of a mushroom stem and either brown or red mushroom blocks, based on the style of the massive mushroom.

Mushroom blocks are easiest to break with an ax, releasing 0–2 mushroom objects of the right sort. Only capstones drop mushroom items in Java Edition, whereas stem sections drop mushrooms in Bedrock Edition. The rate at which mushrooms drop is unaffected by luck in any way. The blocks actually can only be retrieved with the help of a Silk Touch-enchanted tool. When you mine the mushroom cap or stem, you get a block with the cap or originate texture on all sides.

In Java Edition, if two comparable mushroom blocks are positioned next to one another, one of them is destroyed, and the pore texture is shown on the side of all the other objects that it was facing. This is the case because the sides of these blocks transform texture when they come into contact with another block of the same type. Mushroom blocks can indeed be shifted and are unaffected by pistons.

Read More: How To Get Clay In Minecraft? Everything You Need To Know

In Minecraft, how can you get a mushroom block?

In Minecraft, whenever a player mines a large mushroom block, they usually get ordinary mushrooms. A single enormous mushroom has the potential to drop up to 2 mushrooms each block. Enchantments are required for players to acquire the block itself. Silk touch is the enchantment utilized for this. Most Minecraft tools can be enhanced with Silk Touch to mine items that don’t usually drop.

Players will be able to easily break and retrieve mushroom and stem blocks if this enchantment is placed on a tool. In contrast to having varied textures when they are broken off the enormous mushroom, all six sides of these blocks have the same texture when they descend as objects.

Players can mine giant mushrooms for precious blocks by enchanting an ax with a silk touch.

Regardless matter the instrument used, breaking a block from a massive mushroom is simple. The recommended instrument, however, is an ax. Players can return to the base with mushroom bricks and include them in various ways.

The mushroom block can indeed be utilized as a source of energy. One block can forge first and a half items until extra fuel is required. Players can utilize mushroom blocks to decorate their bases, shrinking them down. Insert a mushroom brick behind a note block to add a base sound. When a player’s block is no longer needed, it can be composted. If you throw the entire street into a composter, the amount of compost within is likely to rise. This indicates that the player is getting closer to obtaining a bone meal.

Is it possible to create a mushroom block in Minecraft?

Mushroom blocks are easy to break (which is useful if you have a Creeper in your home and will need a back door), and they don’t burn. They’re a helpful construction block because they’re easy to harvest in big quantities by adding bonemeal to a mushroom established on the ground.

In Minecraft, how can you grow mushroom blocks?

Bone meal can be reduced to a specific red or brown mushroom that is seeded on dirt, coarse dirt, grassy blocks, ingrained dirt, or moss blocks with a skylight as well as a block ambient light of 12 or less, or on podzol, mycelium, or nylium at any light level to produce large mushrooms.

Richard Dawson Net Worth, Autobiography, Career And Many More